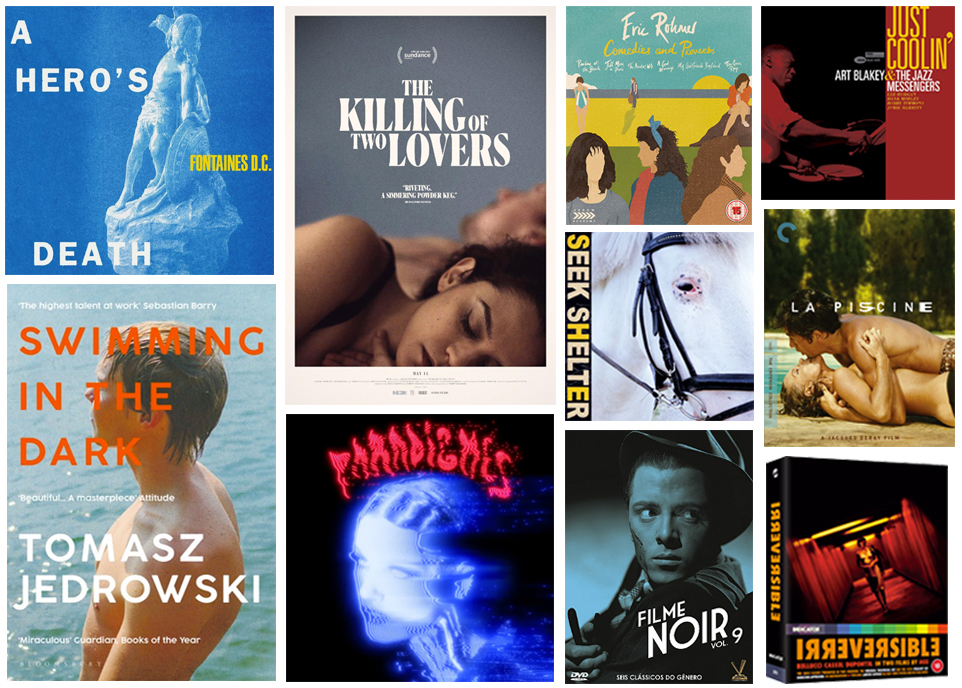 It’s been a while folks but I’m finally back! After watching so many movies is kind of hard to create single lists with single themes, but I’m ready to return to writing and give you some new content. But first, I’ve decided to make a new What’s In My Bag? article to give you some perspective of what I’ve been watching, reading, and listening through these last few months, so here they are:

01. “A Hero’s Death” by Fontaines D.C. I’ve actually discovered Fontaines D.C through their debut album Drogel, but it was A Hero’s Death that made me hooked into them. I haven’t been listening to much music but when I do, I usually listen to them and other similar and current post-punk rock bands. I don’t know if it’s because everything is fucked and they are representing my current mood or if it’s everything else that just seems boring and irrelevant. Either way, this is probably one of the albums I’ve been listening to the most and I ended up buying the vinyl for my birthday as a present to myself.

02. “The Killing of Two Lovers” by Robert Machoian. I had been wanting to watch this movie for a while and now that I finally did I can say for sure this is already the best movie of 2021 so far. With a beautiful cinematography and extremely detailed direction, this modern epic follows the story of a man who has to learn how to work out his broken relationship with his wife. They are both giving themselves some time to think things through and when he discovers his wife is having an affair with another man, he needs to control his worse impulses, resulting in a beautiful, melancholic, and tense work of friction, with an astonishing soundtrack and haunting work of mise en scene.

03. “Swimming in the Dark” by Tomasz Jedrowski. I haven’t read many books this year comparing to 2020 but I must say my favorite one so far is Swimming in the Dark. Written in English by a Polish writer, this beautiful and heart-breaking novel follows the story of a young man in Poland who is discovering his sexuality during the communist regime of the country. Being a mixture of Calling By Your Name with Giovanni’s Rom (James Baldwin’s novel is actually extremely important in the novel), Swimming in the Dark is an impressive story about searching for one’s identity in a world that doesn’t seem to belong to you, not only in terms of sexuality but also socially and politically. The result is a life-changing novel.

04. “Paradigmes” by La Femme. When I first discovered La Femme, I wrote about them in an article here. Their sophomore album Mystere also ended up on the list of best albums of 2016 on Papiro & Mint. Now they are back with not only their best record to date but also the best of the year so far. Released on the day of my birthday, Paradigmes is an extremely fun, strange, sexy, and mysterious record that is both celebratory in its melodies but also pays homage to cinema, fashion, and literature in a very camp and cinematic way. It’s definitely a unique album that is impossible to find a band that is doing something similar nowadays, proving that La Femme is not only extremely unique but transgressive as well.

05. “Comedies and Proverbs” Blu Ray Box Set by Eric Rohmer. I was finally able to accomplish one of my cinephile dreams, which is to have Eric Rohmer movies on blu ray. Sure, I still need the Six Moral Tales and A Tale of Four Seasons from the Criterion, but having these 6 Comedies and Proverbs films on blu ray already makes me extremely happy. Bought it on a sale on Arrow Video.

06. “Seek Shelter” by Iceage. After Paradigmes by La Femme, Seek Shelter by Iceage is probably the best album of the year for me. Being another one of the many post-punk rock bands I’ve been listening to, this Danish band has delivered another outstanding album that I believe to be more optimistic, celebratory, and somewhat nostalgic from their previous releases. Either way, it’s a beautiful and powerful album that will definitely appear on Papiro & Mint’s upcoming list of best albums of the year.

07. Film Noir Box Set. I’ve been watching many noir films during these last few months, which made me have the urge to buy many titles that haven’t been released in blu ray here in Brazil, such as the amazing Brighton Rock by John Boulting. Thankfully, we have this distributor that is releasing several DVD box sets featuring noir films which included this British noir classic in one of them, along with other titles that I ended up discovering such as Night and the City by Jules Dassin, a movie that I absolutely fell in love with.

08. “Just Coolin” by Art Blakey & The Jazz Messengers. Probably my latest purchase when it comes to vinyl, this outstanding record that came out in 2019 is probably one of my favorite recent discoveries in the jazz genre, which makes me feel like playing it again and again.

09. “La Piscine” Blu Ray by Criterion Collection. After I bought the incredible restoration of Beau Travail by Claire Denis I promised myself I wasn’t going to buy any more new Criterion titles for a while. But the next day the distributor said they were going to release La Piscine in blu ray which is nothing but one of my favorite Alain Delon movies of all time. I haven’t actually bought this yet, especially because it hasn’t come out. But make sure I’m already saving some money for the Barnes & Noble sale that is coming in July. The things I do for Alain Delon…

10. “Irreversible” Blu Ray by Gaspar Noé. I believe I got a little over-excited after I bought the Eric Rohmer’s blu ray set and ended up doing something that I wouldn’t normally do which is to pay a somewhat spicy price for a special edition of a movie I don’t have. But this is the Irreversible edition released by Power House Films, including a brand new restoration and the version of the film that is played backward. I don’t usually do this but it seemed right and I’m constantly checking the Royal Mail website to discover when this beauty will arrive in my house.