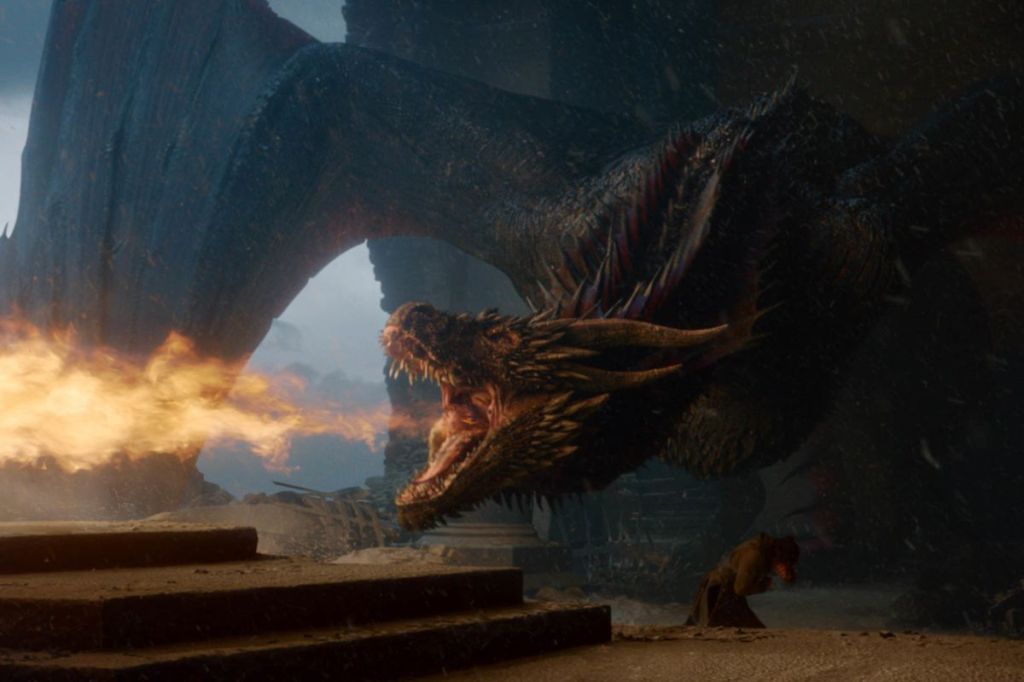 When I first watched the first season of Game of Thrones I wasn’t impressed. I thought it was an extremely well-made TV show but it just wasn’t for me. It was only when I watched the second season a year later that I found myself invested in these characters and ended up rewatching the first season and started reading the books. What happened afterward was me finishing the entire A Song of Ice and Fire novels and claiming Game of Thrones as my favorite series of all times. Until the series finale happened.

Like many of you, I was confused and angry. I didn’t think it was a bad ending but I thought it was a major letdown. I mean, I’ve watched Dexter, Lost, and True Blood until the end so I’ve experienced my share of terrible conclusions. I knew Game of Thrones wasn’t that but why did it have to be like that? I didn’t quite know the answer until I let it sink with me for a couple of years until I’ve recently rewatched the eighth season and realized that despite not being perfect, the ending of Game of Thrones is exactly what the series and George R.R. Martin has been building up to. Here are my thoughts on why is that: 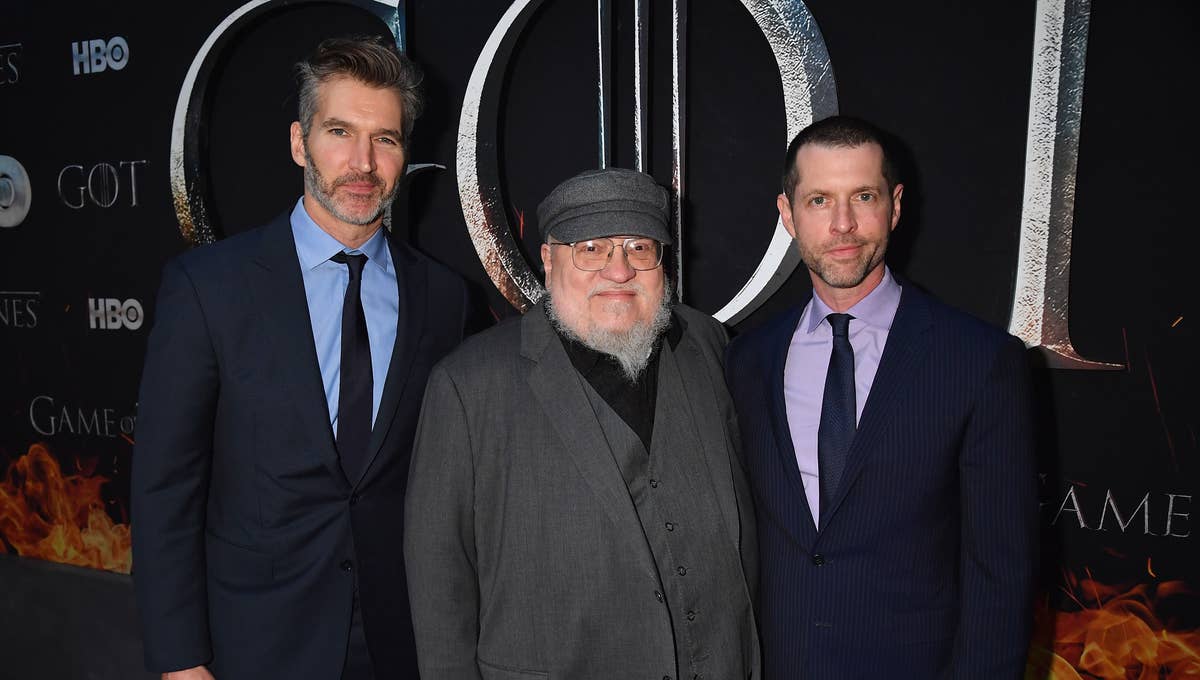 A lot of people complained that the writers ruined the series in the end and there was even a petition asking for “competent writers” to redo the series finale. What people didn’t realize, however, is that David Benioff and D.B Weiss are exactly what made the show so great in the first place. Not only that, they had total support from George R. R. Martin from the start. In the pitch meeting with the Game of Thrones writer, Martin asked the producers who was Jon Snow’s mother and they had the right answer, which ended up being the green card for them to write and create the series.

The relationship between the writers and George R. R. Martin didn’t stop there, with Martin helping them with major decisions such as changing the fate of several characters from the book in the TV show. The writers have also stated that George told them things that would happen in the future books such as the explanation of why Hodor was the way he was and making Stannis sacrifice his own daughter on the fire. And even though the last Game of Thrones book finishes with Jon Snow being murder by the Night Watch, George R. R. Martin has teased people in many interviews that Jon Snow hadn’t actually died. So the fact that Snow was brought back to life in season six isn’t just a decision from the writers but from Martin himself. So if the ending of the series is the way that it is, you can be sure that George R. R. Martin won’t change much in his upcoming books. As a matter of fact, David Benioff, D.B Weiss, and the writer himself have already stated that the books won’t change much from the series. 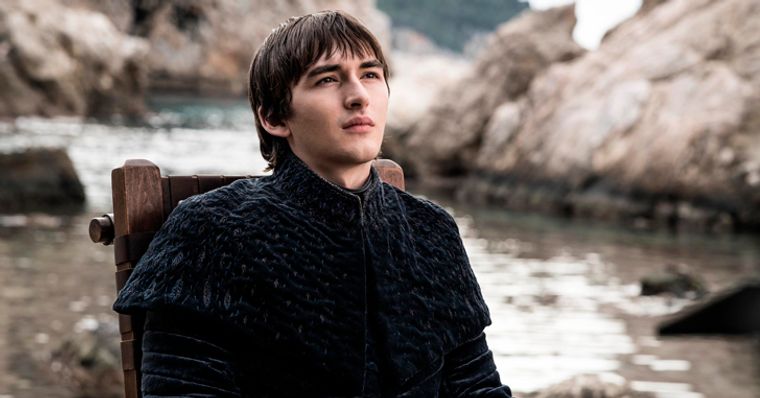 Bran as the King of the Seven Kingdoms

Before the eighth season of Game of Thrones aired, Ayra Stark’s actress Maisie Williams said everyone should rewatch the firsts season of the show to understand the last one better. I did this neither when the finale was aired nor now that I rematched it, but I definitely had several things in mind now that I knew how it was going to end. I mean, why Bran Stark of all the people? The explanation was right in our faces all along.

The first chapter of the novel A Game of Thrones is Bran Stark’s point of view. The first episode of the series is about Bran and how he was pushed by Jamie and became a cripple, to eventually become the Three-Eyed-Raven. Sure, the TV show could have explored more about what the Three-Eyed-Raven means and his relationship with Meera, but this was a TV show that had passed the books and needed an ending, so let’s just remember this is still Hollywood by the end of the day. But the fact that the story started with Bran himself, it made sense that Bran ended up in the Iron Throne, even though everybody was cheering for Dany or Jon, or even Ayra. This is his story and him being King is exactly how the “wheel was broken” by now having all Westeros major houses choosing who the next King of the Seven Kingdoms would be. 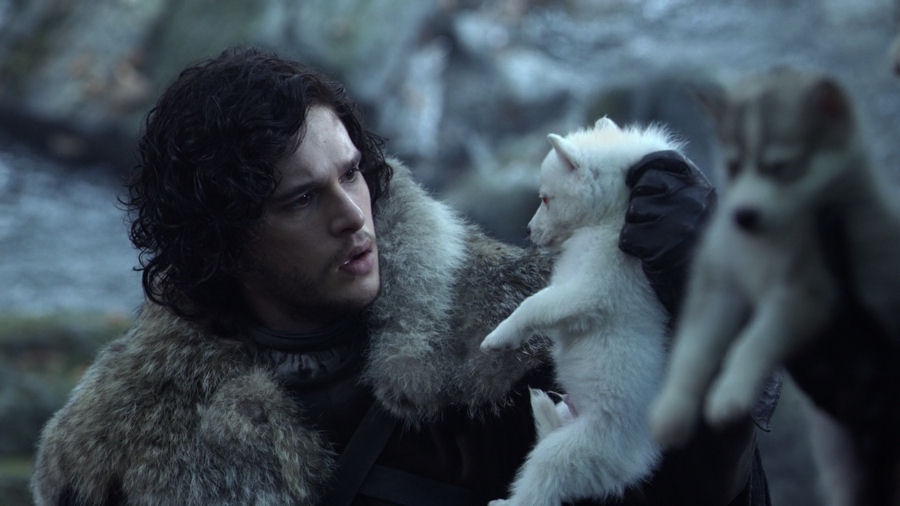 The Starks and the Wolves

And speaking on the first episode, everybody was disappointed that none of the Starks ended up receiving great outcomes in their arduous adventure throughout the eight seasons. But as Ramsey once said, “if you think this story has a happy ending, you haven’t been paying attention.”

If you watch the first episode of the series you will discover the fate of the Starks right in the first minutes when they accidentally discover a pack of lonely wolves in the woods. These wolves end up protecting and helping all the Starks throughout the series but we can also say they represent what will happen to the Starks at the end. They will be lonely wolves, resulting in Sansa taking care of Winterfell by herself, Ayra traveling through Westeros, and Jon Snow leaving Castle Black to join the Wildlings up north. Jon could never be king because it would cause other wars in Westeros. Sansa will never marry again after everything that has happened to her and Ayra was never a lady in the first place. She is a faceless man, after all, and I would love to see a TV show focusing entirely on Ayra and her adventures. 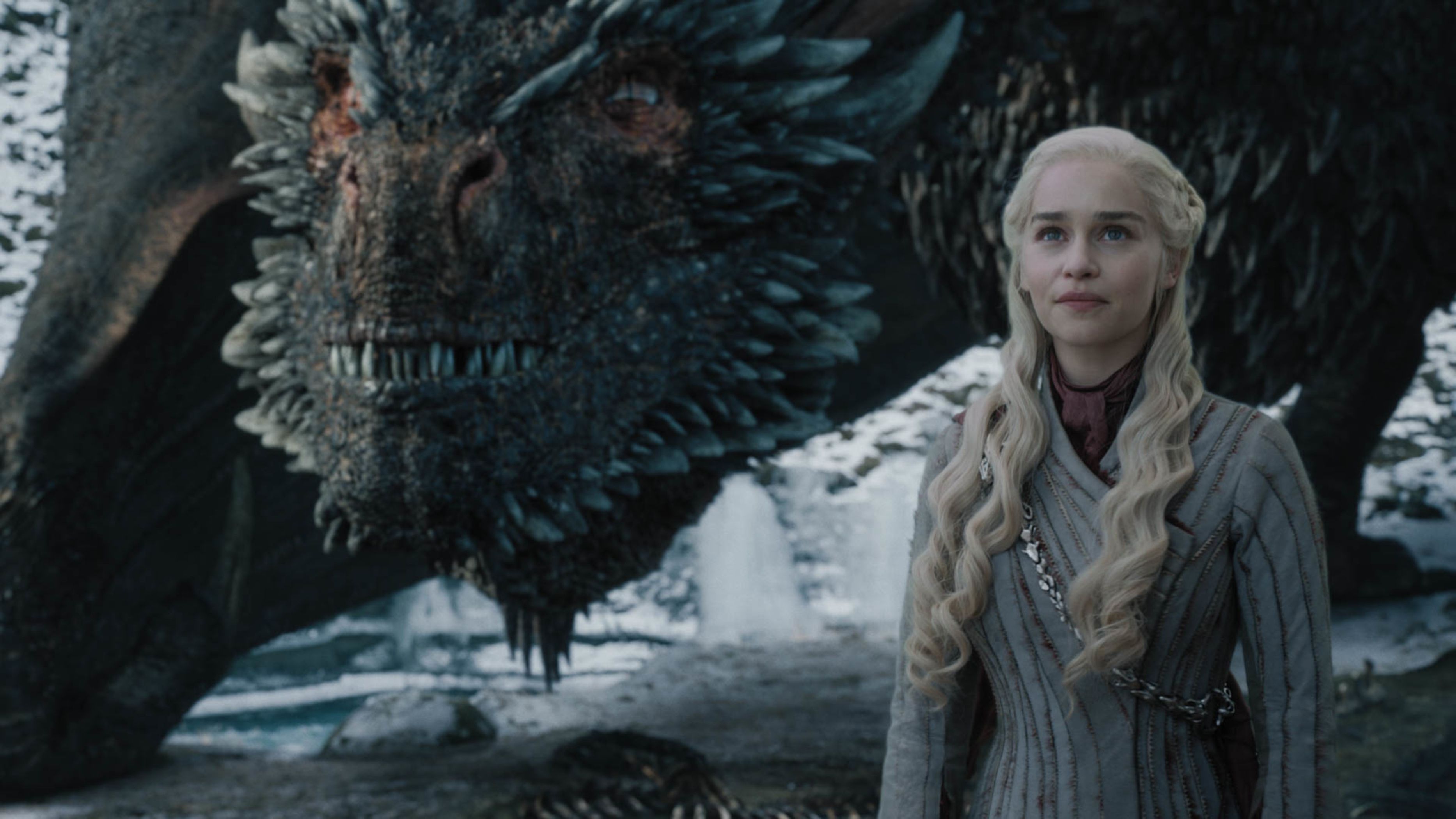 The Rise of Fall of Daenerys Targaryen

Probably the thing that made people most upset was the fact that Daenerys Targaryen became a crazy dictator in one season only. It’s true that this happened a little too fast but it makes more sense than we like to admit.

Daenerys was without a doubt the most incredible character of the show and I stand in the opinion that I would love to see Jon and Dany running the Seven Kingdoms together. But Dany came from another continent, freeing slaves and conquering cities from the very beginning with three Dragons on her back. She was used to being the only Queen and was ready to fight with anyone that stood in her way. When she arrives in Westeros, however, she arrives on land that are other kings and queens already fighting each other for the Iron Throne, and most importantly, she doesn’t have any friends or allies. When she finally finds love and respect from Jon Snow, she discovers he isn’t only her nephew, but the rightful heir to the Iron Throne.

Hate and tyranny are what have driven Daenerys from the start. She had only one goal in mind and that was to sit on the Iron Throne. She starts off great across the sea, but her buttons are pushed in Westeros when she loses two dragons, discovers there’s an army of dead coming, has Missandei captured and killed, and discovers that her lover is actually the truthful heir the Throne. Not mentioning no one likes or trusts her. 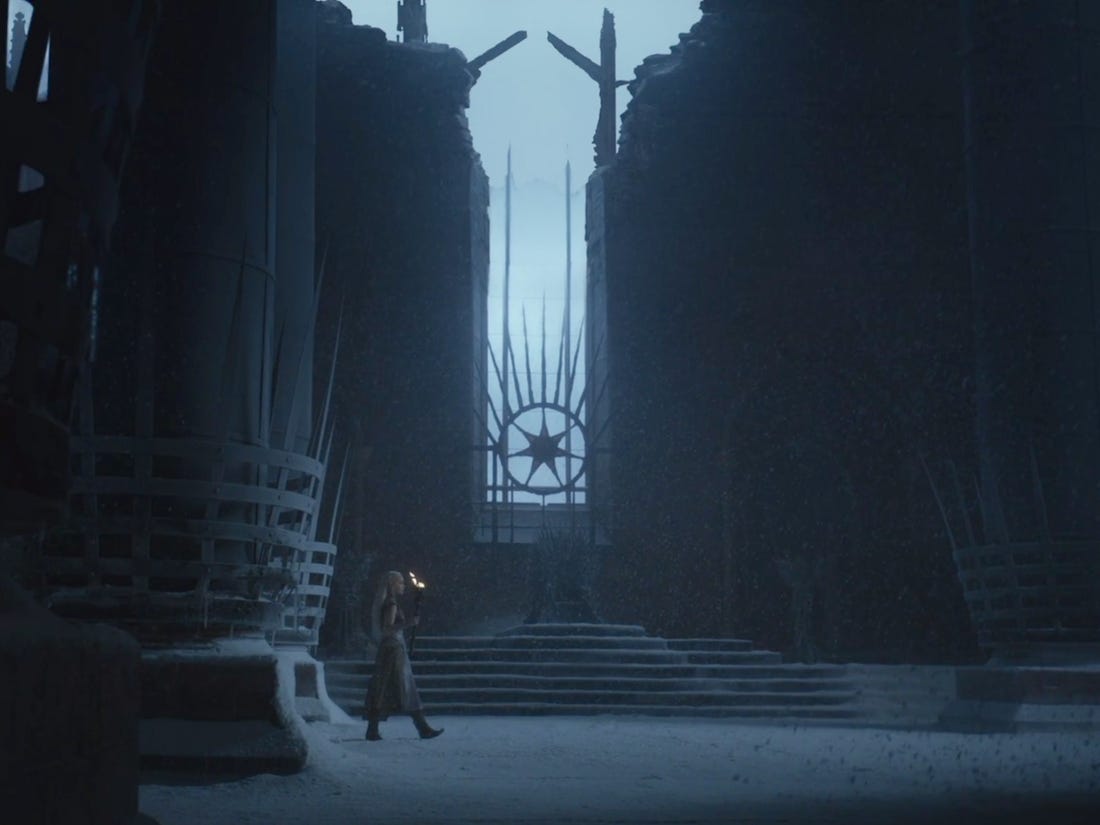 With that, Daenerys Targaryen becomes an incredible study of human power and politics. What happens to her throughout the entire series is very similar to how every dictator has started in the world, with great action and ideas. Everything starts off as great until they have taken control over everything and everybody, and start imposing rules and killing anyone who dares to disobey them. After all, what I love the most about Game of Thrones is how the roles of characters are constantly challenged and subverted. The Kings are bad, the murders are heroes and what is wrong is usually right. Daenerys couldn’t be the exception.

And if you think that was a last-minute decision, just remember the last episode of season one when Daenerys has a dream that she is in the Throne Room and everything is covered in snow. When she touches the throne in the dream, a door at the back of the room is opened, revealing the gate of the Night Watch. In the last episode of the series, Dany does the same but we see ashes instead of snow. And in the back of the room, instead of a gate opening to Beyond the Wall, we see Jon Snow coming to talk to her and eventually kills her. 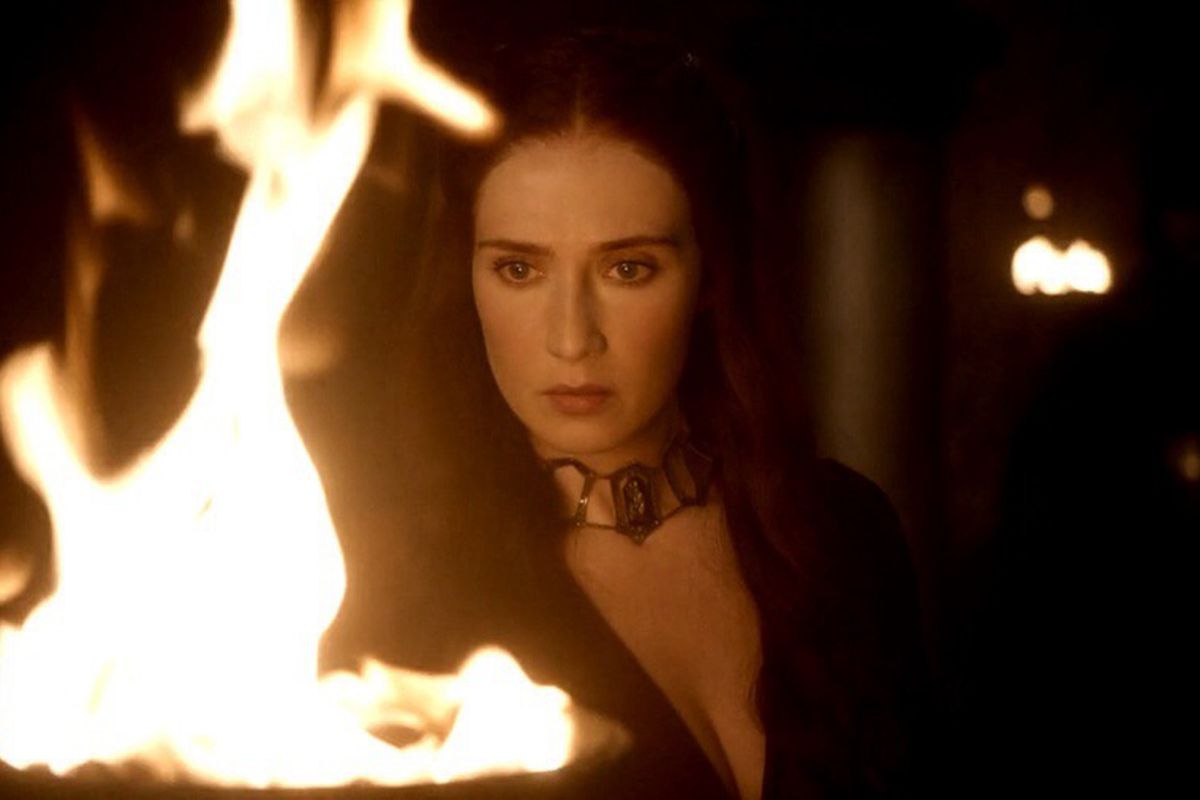 Azor Ahai and Other Loose Ends

In the series Game of Thrones, Azor Ahai ​is a legendary figure that carries the Lightbringer sword, a weapon used to defeat the darkness of the Long Night. This came at a price, however, as in order to unleash the sword’s true powers he had to plunge it into the heart of his loving wife, Nissa Nissa. A prophecy foretells that he will be reborn as The Prince That Was Promised.

Many people in the series believe that this person might have been Daenerys Targaryen or Jon Snow, but the truth is that we don’t know. One of the most fascinating things about A Story of Ice and Fire is that nothing is black and white, which is exactly why the show is so interesting and complex. Prophecies can be read in many ways and the characteristics of these prophecies can be read with different interpretations. I think that Azor Ahai, the Three-Eye-Raven, and The White Walkers are fascinating elements that make Game of Thrones a unique show but that it’s okay that nothing was explained in detail in the series. After all, there are two upcoming books from the author and the show House of Dragons to explore these details more. I understand why people get upset when they see these things getting ignored in the show, but we have to remember this is Hollywood and that doesn’t necessarily ruin Game of Thrones.

Now that Game of Thrones is turning 10 years old and you already know how it ends, I would suggest rewatching the entire series, or at least, rewatch the last season. Sure, the ending it’s not what we hoped for, but since when Game of Thrones has happy endings and fully explained arks? It’s exactly because of this the show and the books are so interesting, complex, and amazing.