Just like most people of my generation, a big part of my interest in film comes from the J.K Rowling books, Harry Potter. Without them, I dare to say this blog wouldn’t even exist as they were also one of the reasons that made me interested in books and arts in general. Now that we have grown up and seven years have passed since the release of the last Harry Potter film, it’s interesting to analyze them and wonder, what are the best Harry Potter films? I could never analyze those movies as I analyze the films I watch on a daily basis, especially because I love every single one of them in a different way. But the task of ranking them sounded as fun as re-watching the films, which made me create this post. So here they are!

The idea of dividing the last book into two movies may sound normal nowadays, but Harry Potter was the first franchise that came up with that idea. Actually, it was J.K Rowling herself that brought this to the attention to the producers for the last Harry Potter film. Not only was an amazing marketing strategy, but it was actually a respectful farewell to the fans as they had always complained about the material that was cut-off from the books. With that, Harry Potter and the Deathly Hallows – Part 1 is not only the most faithful movie of the series but also one of the most different and exciting from the franchise as Harry, Ron and Hermione spend the entire film running away from Death Eaters and looking for Horcruxes instead of going to Hogwarts school. It’s also a nice change in the story as ten years had already passed when the movie was released, so everybody who followed Harry until here wasn’t really looking forward to watching him on Potion classes anymore. Of course this all comes from the books, but being on the tenth year and in the last movie, The Deathly Hallows also served as an invitation to the new generation that was to come.

Probably the favorite Harry Potter film for most people, The Prisoner of Azkaban is also one of the most important for breaking the childish looks from the first two films and introducing a more dark and sinister tone with an extremely beautiful cinematography and art direction. Alfonso Cuaron also re-transform the series with his direction by introducing a lot of music into the film and different elements that weren’t even in the book.

The second part of The Deathly Hallows is not as epic as the first one promised to be. However, it’s still one of the best Harry Potter movies ever made. Unlike the previous seven films, Deathly Hallows Part 2 is a war story where everything comes together and we say good-bye to the cinematic experience of the Harry Potter books. Most of that comes from J.K Rowling’s novel and the conclusion of its arcs, but the work of David Yates in the direction, Steve Kloves in the script and the Portuguese cinematographer Eduardo Serra are still a body of work so far ahead from film franchises like Twilight and The Hunger Games that makes Harry Potter and the Deathly Hallows the most important film of the saga. 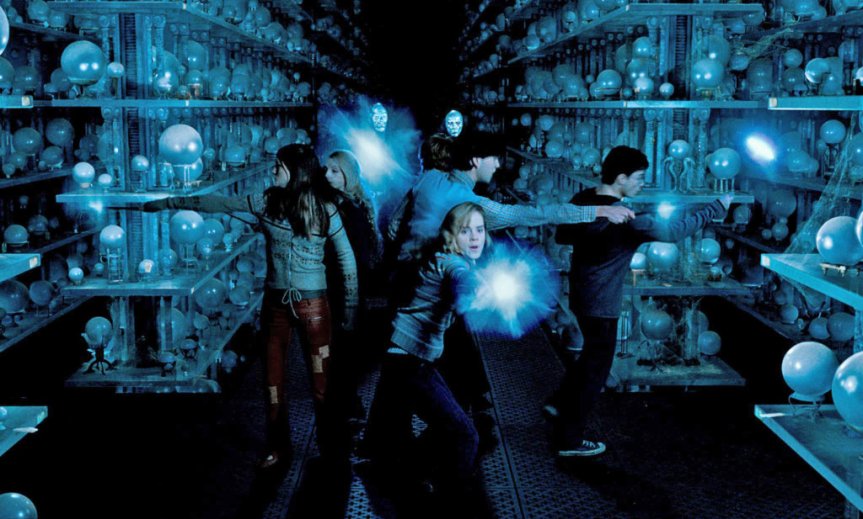 And speaking of David Yates, this was the first film from the Harry Potter series directed by him. His tone was so right for the franchise that he did not only directed the series until the end but also continued working with J.K Rowling in Fantastic Beasts and Where to Find Them. Not only that, The Order of the Phoenix was the largest book to be adapted for the screen, which despite the fans went crazy with the excess material that was cut off, it’s also a remarkable film for the number of things that happen and an epic battle between Voldemort and Dumbledore at the end of the film. The Order of the Phoenix expands the Harry Potter universe in ways we’ve never imagined and David Yates approach is brilliant, especially for setting an even darker tone from Alfonso Cuaron’s work, that would keep getting darker until the end of the series.

How fantastic the position J.K Rowling is in by being able to create whatever she wants after the Harry Potter franchise. Fantastic Beasts is the perfect example of that as she wrote the script herself and now is on a journey to continue the story with four more movies! No one could have ever expected this film to come out, especially because the book based on the film is actually just notes from a character from the Harry Potter world about magical creatures. With that, Fantastic Beasts and Where to Find Them is a wonderful film set in the 20s where we’re able to check the magical world in the United States, that has a completely different view of what we’ve seen throughout the eight Harry Potter films, creating an extremely original and delightful experience. Oh, and it’s also the first Harry Potter film to have ever won an Academy Award (Costume Design).

Without a doubt the film with the best cinematography of all (it was nominated for Best Cinematography at the Oscars), Harry Potter and the Half-Blood Prince was one of the most successful films of the franchise and curiously enough, the one with less publicity. It’s also the last film where Harry, Ron, and Hermione are at Hogwarts taking classes since in the next book and film, they would run away from Death Eaters and search for Horcruxes. But it also serves as a good-bye to the world we have always loved – the classes, the teachers and the secrets of the school. I personally think the film is a little too slow-paced, but its visuals and plot turns Half-Blood Prince into a very important film. Especially because of a major death at the end. A lot of film critics like to say this is the best Harry Potter film ever made.

Harry Potter and the Goblet of Fire is without a doubt the most entertaining film of the franchise. I’ve watched two times on the same day when it first came out and I couldn’t believe how exciting the film was. That happens because the story is very much about teenagers and how they are starting to fall in love and flirt, which was something new in the story as the characters were growing older. Not mentioning we have an exciting tournament in the film with dragons, mermaids and a deadly maze that turns everything cooler and different from what we’ve seen from the previous Harry Potter films. Also, this is the first movie from the series where we actually get to see Lord Voldemort for the first time.

A lot of people say this is the weakest film of the series, however, I tend to disagree a little because I love how the Harry Potter universe expands on this one as this is the second film of the franchise. It’s also very special to me for personal reasons as this was the first film based on a book which I had actually read – so the expectation was huge! I didn’t read the Philosopher Stone when it came out so seeing everything I’ve read on a big screen was an experience I’ve never had before! Not mentioning is fun and a little bit silly, and so rich in its elements that you wonder where are films for kids nowadays that can be compared to this one.

Even though The Philosopher’s Stone holds the last place on the list, it’s impossible to say it’s a bad film. This is what made us fall in love with Harry in the first place. Hogwarts, Quidditch, the Forbidden Forest and of course, the trio formed by Harry, Ron, and Hermione. Watching it after almost twenty years it feels a little childish and not impressive as the last films. Chris Columbus, however, creates one of the most magical scenes of the franchise in this film, transforming Harry Potter and the Philosopher’s Stone into a must-watch classic, and of course, where everything began.

What about you, what are your favorite Harry Potter films?