One of the many faces of nouvelle vague and considered the French James Dean, Alain Delon made his name through the history of cinema among great directors such as Michelangelo Antonioni, Jean-Pierre Melville, and Luchino Visconti. Considered one of my favorite actors ever, I’ve decided to make a list of 10 great performances of his 10 best films after watching another of his many works.

*This article has been updated in honor of Alain Delon’s Honorary Palm d’Or at the 72nd Cannes Film Festival.

Alain Delon’s most notorious film is probably the best of his career. His amazing performance is not only brilliant but the persona he creates on this modern neo-noir made him an international sex symbol and even ended up being the name of a fragrance. The concept of the true gentlemen was retransformed with Le Samourai, and Jean-Pierre Melville helps to create this image by making an extremely sophisticated film with minimalistic elements, almost no dialogue, an amazing cinematography and the use of jazz as the soundtrack, retransforming the French Noir genre and Delon’s career. Nothing gets cooler than Alain Delon in Le Samourai.

The movie that set Delon’s career, Purple Noon is probably my favorite film from the French actor. Despite being amazing as it is, Delon’s performance is beautiful and quite interesting for playing Tom Ripley, a man of many faces who ends up stealing someone’s identity and has to deal with the consequences of his acts. René Clément creates a beautiful and poetic movie based on the novel by Patricia Highsmith with very elegant clothes and impeccable cinematography, transforming this film into a hypnotic tale of a sociopath that you won’t be able to turn your off from the screen. 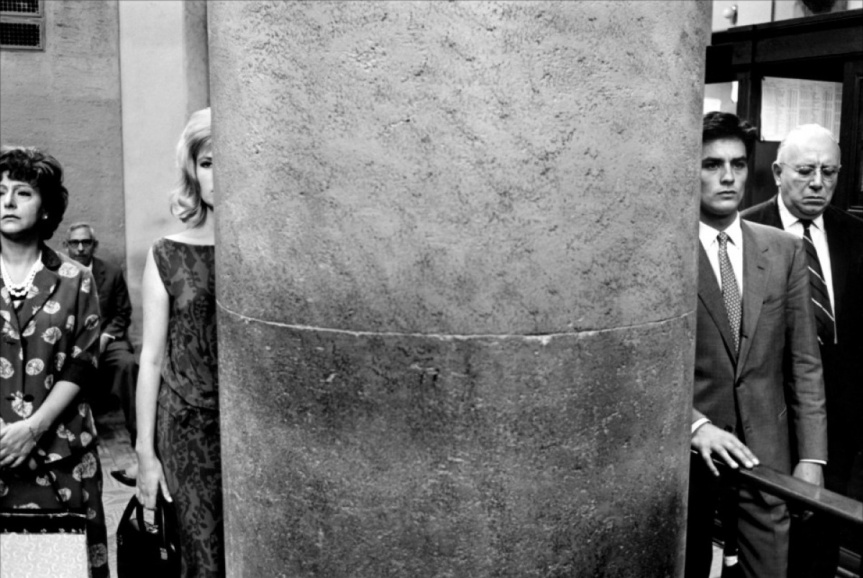 L’eclisse may be a little hard to watch for those who are not used to Michelangelo Antonioni’s cinema, but the greatness of this film lays exactly where words are unspoken and characters are misplaced. Being “incommunicability” the main theme of Antonioni’s filmography, L’eclipse is an extremely beautiful and subtle love story about two characters who can’t communicate. More than an amazing film featuring Alain Delon and Monica Vitti, L’eclisse is a lesson of cinema and mise en scene by creating beautiful, different and meaningful images to project the emptiness of human condition and relationships.

Probably one of the best Alain Delon films from the 70s, Mr. Klein is an impeccable thriller about an art collector who is mistaken by a Jew with the same name during the Second World War and tries everything on his power to prove his Arian heritage. More than a movie about double identities, Mr. Klein is a lesson of mise en scene where the director is more concern in raising questions than answering them, resulting in a reflexive film about existentialism and the human condition. Alain Delon gives us an extremely minimalistic and delicate performance, where we’ll always doubt his character and his decisions. A simply must watch.

One of the many incredible traits of Alain Delon’s career was his participation of many French Noir films with the incredible Jean Gabin, who according to Delon, taught him the most important things about acting. Any Number Can Win is probably their best movie together, talking about a casino robbery set on the French Riviera. An extremely sophisticated film about a robbery that becomes highly recommended with Delon, Gabin and the incredible direction of Henri Verneuil.

In a recent interview, Delon has stated that it was impossible for him to watch La Piscine again. For him, this film represents the best period of his life with many people he loved, who today are dead, including his ex-wife, Romy Schneider. Once you watch the film you can definitely understand how it would become hard to watch, seeing yourself in the best form possible with people you love in a movie about gazes, body and sexual tension. La Piscine is a very contemplative film about desires that focuses on a couple who is troubled with the visit of a friend of theirs and his daughter, who is played by no one else but Jane Birkin. This title would later be retransformed with A Bigger Splash by Luca Guadagnino.

Also known as Indian Summer, this is another important Delon film from the 70s directed by Valerio Zurlini, an incredible Italian director who did several great films with the most interesting actors of his time. La Prima Notte Di Quiete is a movie that celebrates the sadness and loss in life through small moments of joy and love. Alain Delon plays a teacher who seeks refugee of his suicidal thoughts and falls in love for one of the students from his class, starting a poetic and melancholic odyssey of human exile. It definitely has a different tone from his other films but the uniqueness of Zurlini’s movie is something beautiful, interesting and worth to watch – especially Delon’s depressive and badly shaven character.

Rocco and His Brothers (1960) by Luchino Visconti

Even though Alain Delon isn’t the main character of Rocco and His Brothers, he is exactly what makes this Luchino Visconti’s masterpiece so great. Playing one of the five brothers of a troubled family who moves to the city of Milan to try their luck in the big city, Delon gives us one of the most touching roles of his career by portraying the young kid who doesn’t fit to become the man who ends up saving his own family by giving up his dreams. Not only that, Rocco and His Brothers is known to be one of the best Neo-Realism movies ever made and Luchino Visconti’s best films.

The Leopard (1963) by Luchino Visconti

I must admit this isn’t my favorite Alain Delon film. I think it’s extremely long and a very boring, but the importance of The Leopard must not be taken for granted. With an outstanding production, Delon plays the nephew of an important aristocratic family who faces the fall of their kind with the unification of Italy in the 1860s. Focusing on the relationships of the family and how they respond to the events that unfold before their eyes, The Leopard is a very sophisticated film that was extremely important to Delon’s career and according to many people, is one of the best movies ever made.

The Red Circle (1970) by Jean-Pierre Melville

And for last but not least, The Red Circle is the second film by Jean-Pierre Melville featuring Alain Delon after the extreme success with Le Samourai. Here, Delon plays a criminal who just got out of prison and ends up being part of another scam without even planning. With an incredible cinematography and Melville’s mise en scene at its best, I dare to say the film is even more challenging than Le Samourai, but with a different effect by portraying a more ambitious story with a more complicated plot. Both of them would later work together in Un Flic, which sadly would be Melville’s last film.