Lately I’ve realized I have something for films that portray boys or men in prison or in restricted schools. Since The 400 Blows and Salo or 120 Days of Sodom are one of my favorite films, that’s not actually very surprising, if you think about it. Since a lot of the films I’ve seen with such subjects are movies only a few people have watched, I decided to make a list of seven films that talk about them. Here they are:

The Tribe (2014) by Miroslav Slabothpitsky

I’ve already talked about The Tribe but it’s impossible not to talk about it again. Probably the best film that portrays rebel young teenagers at school, The Tribe it’s a masterpiece in terms of filmmaking. It’s not only violent, original and interesting but it’s also incredibly unique by telling a story with no dialogue since all characters are mute and communicate themselves through sign language only. Not mentioning each scene is filmed in one single shot, creating a two-hour film with about 20 scenes with shots that takes from 5 to 10 minutes. Not mentioning the story is weird, provocative and someway beautiful.

The Loneliness of the Long Distance Runner (1962) by Tony Richardson

This film is one of the first films that are part of what is called the “British new wave”, which comes from the influences of the nouvelle vague in France. If the French had Truffaut and Godard with 400 Blows and Breathless, the British had The Loneliness of the Long Distance Runner by Tony Richardson. The film is divided in past and present where we see the life of Colin Smith, a young boy who just lost his father and goes to prison after stealing some money from a bakery. The film shows his life in the prison where he ends up being famous by being a good runner on exercises, where he might be able to compete with another school. We also see his life before he goes to prison which was literally him fooling around with his friends and girls he finds on the street. The film is incredibly beautiful and talks a lot about morals, identity, coming of age, and has a certain criticism about the capitalistic world. Definitely a must-watch, even if you are not that interested in the theme of this list.

Le Trou follows the cliché formula of a story of prisoners trying to escape. But just like any other French film, Le Trou builds this conflict in a very interesting and unique way. Four prisoners who already live together have a plan to escape the prison. However, when a newcomer arrives to share the room with them, they start having doubt if they should trust the new guy or not. Once they accept they do, they start digging a hole on the ground. The entire film is their plan being put into practice, which is very tense and edgy, especially because the whole film happens in the room where they are locked in. Also, the end of the movie is extremely shocking and touching, being one of the most incredible films I’ve seen! Not mentioning the photography is beautiful!

Jack O’Connell is a monster on this beautiful and violent film by David Mackenzie. Playing a young violent boy who goes to the same prison where his father is at, Starred Up goes to places in the story where no other movie about such subject has been. With an attitude of not giving a fuck about anything, the main character tries to live in the prison by following his own rules while his father keeps trying to calm him down. But how could he do such thing on prison when he wasn’t there for him when father and son were free? Interesting themes, great acting, and amazing photography make Starred Up one of the best films of 2013! And of course, one of the best about boys in prison. 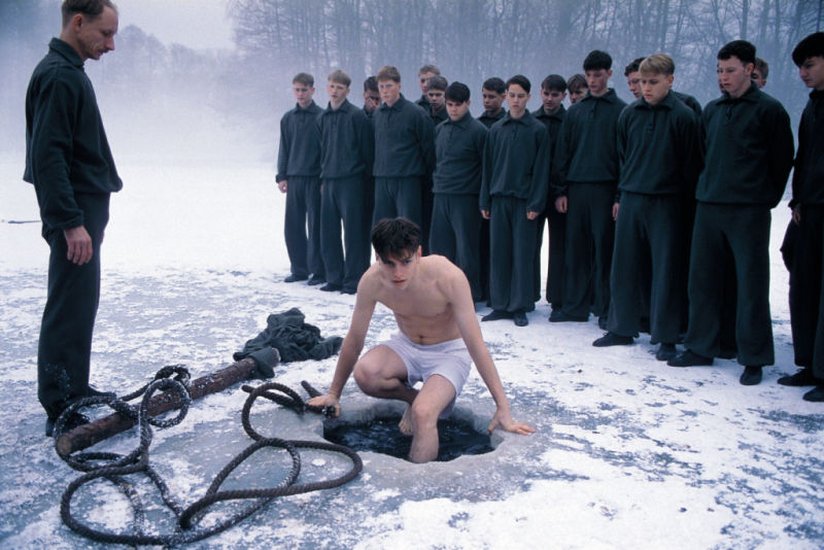 This unknown german film talks about very interesting things that I have actually seen in only a few movies. The Nazi party is getting bigger and bigger and Friederich Weimer is a well-talented jock who is invited to join a Nazi school. Not carrying much about politics, the student joins the school because he knows it can open a lot of doors for him and his career. However, once he gets there, he finds himself living in a restricted, violent and dangerous school. The film is literally what the Nazis were about: a party who seemed great and people who were really proud to be in it but got so blind by such accomplishments that stopped realizing the terrible things they were doing. Before the Fall plays with that in very interesting ways, especially the friendship that Friederich has with a boy who ends up falling in love with him.

Also happening during the second world war, Julien is a 12-year-old boy who studies in a school away from the Nazi occupation in France. Trying to get along between the rebel students, Julien ends up being friends with a newcomer, Jean. However, what Julien doesn’t know is that Jen is a Jew and his presence in the school is just a way to hide him from the Nazis. Being a very important film from Louis Malle, Au Revoir, Les Enfants it’s a beautiful movie about friendship and coming of age that also relates to films such as The 400 Blows.

Robert Bresson is a very, very dry filmmaker; however, incredibly poetic. A Man Escaped is my favorite film from the director because it’s extremely simple but very touching thanks to its poetic view of a man inside a prison and his planning to escape. This film and Le Trou are very similar, but the difference is that Le Trou contains way more action than this one. With its simplicity, Bresson shows the thoughts, hopes, and dreams about the prisoners in a cell and their lives and their plan to escape the prison. The prison escape scene is really good and its ending it’s incredibly beautiful.