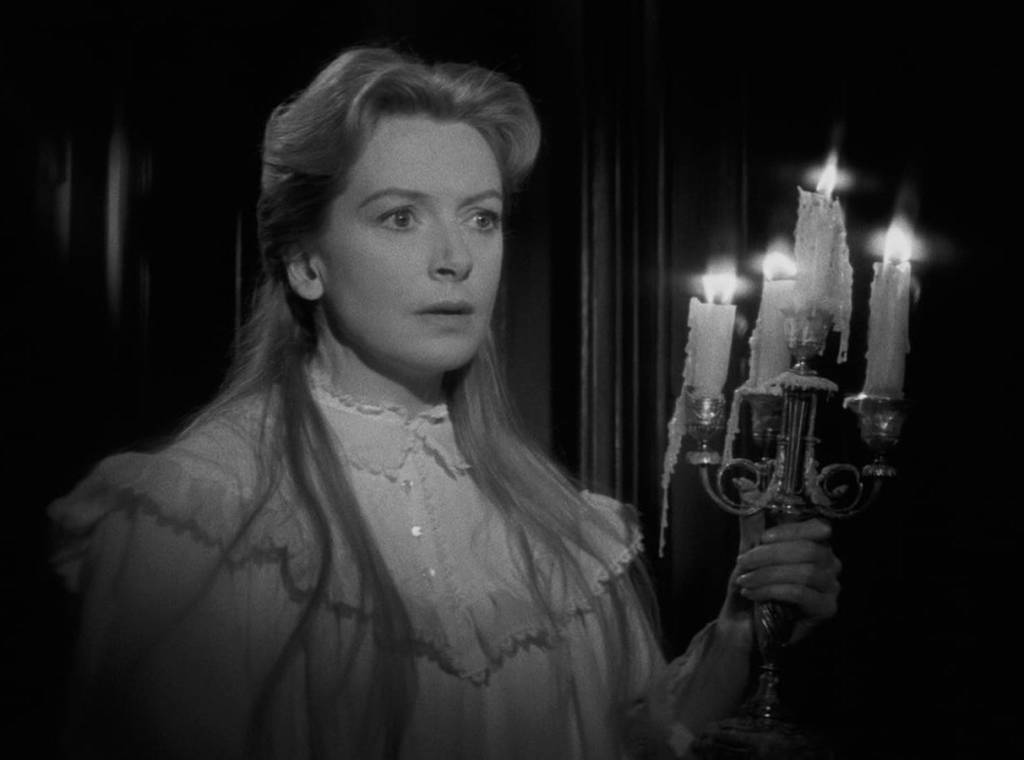 The first time I watched Jack Clayton’s The Innocents I thought it was a good movie but nothing out of the ordinary. I could see it was brilliantly shot but I thought the story lacked depth and it wasn’t scary enough. Rematching it now, almost nine years later, I saw a completely different film. So different that I thought I should write one of my revisiting articles about this masterpiece of the horror genre.

I watched this film for a test in one of my film school classes. I remember that my teacher spoke something about The Innocents being in the fantastical genre, where the story never reveals the truth of what really happened, making the conclusion open to interpretation. This was much clear rematching it now as I approached my viewing with different eyes and it doesn’t take long to realize that there’s something terribly wrong with Deborah Kerr’s character, Miss Giddens.

The movie opens with a sinister but beautiful lullaby while we see Miss Giddens praying while the credits roll. She prays to God that she wishes to save the children and not destroy them. The scene fades away and we are thrown in her job interview with a widowed man who is looking for a governess to take care of his children who live in the country. The first thing the man asks is if Miss Giddens has imagination, which she confirms. And is exactly the subject of imagination that William Archibald and Truman Capote will play throughout the 100 minutes of the movie.

After accepting the job, Miss Giddens moves to the countryside where she meets one of the children, Flora, and the maid, Mrs. Grose. Everything seems to be perfectly all right until she receives a letter saying that Miles, the other child who is in school, has been expelled and is returning home after making his presence with the other children difficult. This event seems to disturb Miss Giddens as she looks concerned and says almost to herself that he will “contaminate” and “corrupt”, showing that she almost has subconscious hate towards the boy she has never met. However, as the movie keeps going, we could say that the character of Miss Giddens is someone who suffered from sexual abuse, probably from her father.

The first hint, even though it isn’t obvious at first, is when Mrs. Grose says that the uncle of the children had a “devil eye” when it came to choosing his governesses, making Miss Giddens look at her with shocking eyes. When the letter arrives announcing Miles return, it also means that the marvelous mansion full of women and girls will now receive a boy, who does not only represent a man in the house, but also a dangerous man as the school refers. When Miles arrives at the station and they drive through the country in the carriage, Miss Giddens is constantly looking at him with fear, trying to make him confess about what he did to make him be expelled.

The Innocents, however, is a ghost story and it doesn’t take long after this for us to start seeing ghosts. But are they really ghosts or just Miss Giddens’ paranoia from past trauma? Miss Giddens obviously doesn’t feel safe anymore and start to see the house as something to be frightened of. When the children decide to play hide and seek, a game that Miss Giddens used to play with her father, she goes looking for them in the attic where two important events occur. First, she finds the picture of a strange man. Then, Miles scares her and puts her arms around her neck, making her feel uncomfortable. This could easily be interpreted as a trauma coming to the surface since this could be exactly what she felt when she was abused when she was a child after playing hide and seek. The face of a man and someone struggling her. Of course, this could only be coincidental but then Miss Giddens decides to be the one who hides and after hiding herself between the windows and the curtains, the same man from the photograph appears approaching her with evil eyes.

It’s very important to realize that this belief comes straight from Miss Giddens’s mind. Nothing in the film has ever suggested that and it somewhat makes sense when Mrs. Grose reveals that Peter and Miss Jessel were madly in love with each other and that they had an abusive relationship. Mrs. Gose also implies that they used to have sex in broad daylight in the rooms with the doors open, making it possible for the children to see them. Miss Giddens automatically starts saying that Peter and Miss Jessel were trying to harm and corrupt the children and they were probably trying to do the same thing now after they were dead. This could actually be the case but I couldn’t stop thinking this was a traumatized woman who was listening to the story of an abusive relationship and identifying with her own and her desperation to save the children was somehow an attempt to save herself. The problem, however, is that this salvation starts to become an episode of hysteria and paranoia as the film unfolds and what is real and fantasy starts to fade.

Another important scene in the movie is when Miles kisses Miss Giddens in the mouth after saying good-night. This seems to disturb Miss Giddens profoundly as the camera focuses on her trembling mouth. As the visions keep reappearing and Miss Giddens’s beliefs keep growing strong, the governess forces Flora to admit she also sees the ghosts of Peter and Miss Julie, which makes her scared and calls Miss Giddens a cruel woman. After failing with Flora, Miss Giddens asks everybody to leave with the exception of Miles, where she plans to make him confess. This encounter is rather ambiguous as Miles acts like an adult and admits that he has stolen things and said lies at school. When Miss Giddens forces him to admit that he is being manipulated by a ghost, Miles gets angry and says that she is crazy. In the last scene of the movie, Miss Giddens forces Miles to see the ghost of Peter Quint, which results in him screaming to the garden until he petrifies. We are not sure if he has actually seen something or just had a mental breakdown from the pressure Miss Giddens imposed on him. Miss Giddens, however, seems to believe that the ghost has left and kisses Miles on the mouth.

As we could interpret this as both a ghost story and a crazy woman experience, I believe there are many psychosexual subjects within the script that translates into a sexual abuse trauma: the fact Miss Giddens is afraid when a man comes to the house, the apparitions of two ghosts who suffer from an abusive relationship, the discomfort she has when Miles kisses her and the absurd paranoia she believes that the ghosts are corrupting, manipulating and will eventually possess the children. After all, who is indeed safe at the end of the film? Miles or Miss Giddens? As I’ve said before, the ending is open to interpretations.

One way or the other, the fact that a 1961 film could portray any of these things in a horror film is absolutely fantastic. Jack Clayton is mostly famous for the British new wave drama Room at the Top and the adaptation of The Great Gatsby with Mia Farrow and Robert Redford; but is Freddie Francis who steals the movie with his astonishing black and white cinematography. Deborah Kerr is also amazing, which really makes me wonder what were Jack Clayton’s notes for her performance. Did she know exactly what was wrong with Miss Giddens and those children? Maybe the fact that we don’t know 100% is exactly what makes the film so good and make not only me but thousands of people to write and talk about it.