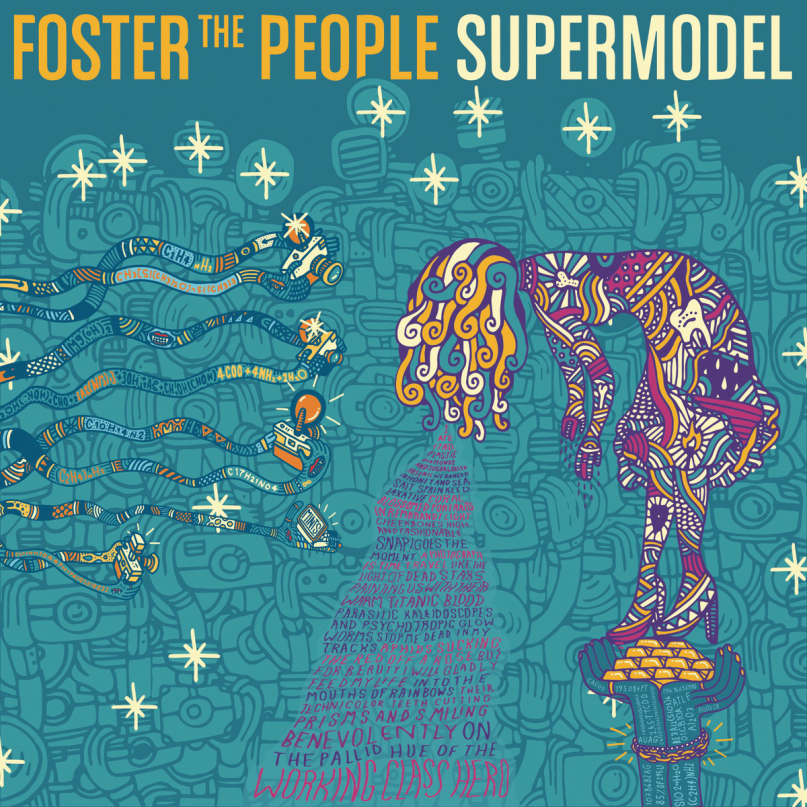 I don’t plan to write much about music or films on this blog, but since Foster the People is one of my favorite bands and I’ve been waiting for the release of this album for more than a year, I couldn’t not write about it.

Foster the People is a band that came out from the MGMT, Passion Pit, Friendly Fire’s music scene to become a band of respect. Starting with the album Torches and kicking off the radio with Pumped Up Kicks, the band spent two years traveling around the world, growing not only as a group but also musically, making Torches a small album for a band that grew so much in just a little time. The songs from the first album changed through the shows, becoming way more well-developed and musically better when played live. The band who were only three boys (Foster, Pontius and Fink) became five (Innis and Cimino) through their tours, helping them to perform a better live show. Not mentioning they’ve received three Grammy nomination, including for Best Alternative Album.

After two years of touring around the world, Supermodel came to show what Foster the People is really about. It’s not about being a better or worse album than Torches, but a continuation of a band who started at small venues and now are the most wanted band in festivals around the world. And they deserve it. They’ve worked hard for it (approximately 300 shows in two years). They’ve improved their selves and they wanna go further. And with Supermodel, they have.

One of the first things you can tell about Supermodel is that it’s a really guitar driven album. And that’s exactly what lead singer Mark Foster told in interviews before, which makes total sense when you look at their inspirations. Their role models are not alternative bands from recent years, but bands from the ’60s and ’70s like The Beach Boys (their favorite band), The Clash, Kenny G, Jamie Brown, The Weather Report, among others. So you can tell they really went further with this album, not only making modern songs but mixing their taste with the kind of music they’ve already done in Torches. The tracks “Goat in Trees” and “Fire Escape” are almost all played by a guitar only. Along with “Nevermind”, which is one of the best tracks of the record.

And speaking on the ’60s and 70’s songs, one thing you can tell about Supermodel is how sort of retro and vintage the album is. All songs have some sort of nostalgia feeling, and the production design of the “Coming of Age” video clip proves that Supermodel brings back some of that time period that was used from the influences the band took to build this album. Also,  the second big thing you can tell about Supermodel is how well produced the songs are. Differently from the first album, the band created the songs with six people in the group – yes, there is a new member in the band called Phill. So on this album, Foster the People were able to make music that will sound exactly like it will sound on the stage, unlike Torches which started being worked up through their tour.

Still, my favorite tracks are the most modern ones, like “Pseudologia Fantastica”, “Best Friend” and “A Beginner’s Guide to Destroy the Moon”. Here, the band takes what they’ve already done in tracks like “Houdini” and “Miss You” and gives us probably the best songs the band has ever done so far, with electric, dancing and powerful rhythms. Which is also very important because Supermodel is not like one of those albums where the band completely changes after their first record, but actually improve themselves. And those tracks are where Torches meets Supermodel, connecting them in some sort of way.

For the conclusion, I can’t compare Supermodel with Torches since they are not albums to be compared. Like I’ve said before, Supermodel is definitely a continuation of Torches, or, of a band who grew up a lot in a short period of time and explored themselves not changing or being the same. They have evolved and they keep evolving. The only thing I know for sure is that Foster the People is not a Pumped Up Kicks hit anymore, but a band to be respected for everything they’ve done in the last two incredible albums. And of course, I’m loving it!